A Brief Look at Ethernet Cables 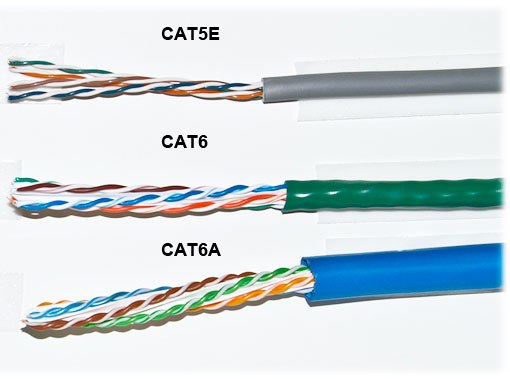 A Brief Look at Ethernet Cables

An Ethernet cable is a very popular type of network cable which is used for wired networks (a network type which connects devices to the Internet or other networks using cables).

They are used to connect devices located on local area networks (LANs), such as routers, PCs and switches.

The following table summarizes the most common types of Ethernet cables, including their maximum data transmission speeds and maximum bandwidths.

Twisted pairs were designed to reduce or minimize crosstalk between long cable lengths running in parallel. Known as differential mode transmission, the two wires carry equal and opposite signals and the destination detects the difference between the two. Interference signals tend to couple to both wires equally, producing a common-mode signal which is cancelled at the receiver when the difference signal is taken.

Solid conductor cables have one solid wire per conductor, while stranded conductor cables have several strands of wire (typically seven) wrapped around each other to form a single conductor. Each type has its own advantages and disadvantages. Solid conductor cables are best for fixed wires within the walls or structure of a building. The single conductors are sturdy enough to be punched down into wall jacks and patch panels, but not as easy to install into a typical RJ-45 connector. Stranded conductors, on the other hand, can fray when punched down into wall jacks, so they are better suited to be crimped into an RJ-45 connector. They are also more flexible and forgiving when bent at sharp angles, so they are better suited for patch cables and applications where the cable may be rolled up or otherwise moved around.